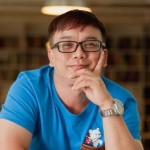 Multi-award winner illustrator, Patrick Yee, is one of Singapore's leading illustrators with more than 155 children's books. He received "The Most Prolific Illustrator" award from the Singapore Book of Records in 2016.He is most well-known in the US for his Rosie Rabbit series which have been translated into eight languages. Patrick is behind the successful Lee Kuan Yew series in Singapore. He holds a degree in Graphic Design from Camberwell College of Arts and a Master's degree from Brighton University, U.K. Patrick is also actively involved in the local arts scene, teaches at various tertiary educational institution and conducts regular art workshops for young children.