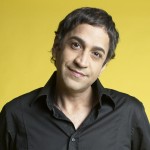 Resident Playwright of The Necessary Stage, Haresh Sharma is a recipient of the Cultural Medallion and the Southeast Asian Writers (or S.E.A. Write) Award (Singapore). He has written more than 100 plays which have been staged in over 20 cities. Haresh has 10 publications of his plays, and his works have been translated into Malay, Mandarin, Greek and Italian. His play, Off Centre, has been selected by the Ministry of Education as a Literature text for 'N' and 'O' Levels.