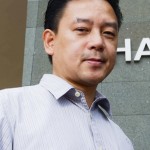 Eric  was nominated for the Singapore Literature Prize and won a Goh Sin Tub Creative Writing prize for poems in his second collection, After the Fall (dirges among ruins). His first poetry book was A World in Transit. He co-edited the Get Lucky anthology of Singapore and Filipino writings and Sg Poems 2015-2016. He has been featured in & Words, Reflecting on the Merlion, Southeast Asian Review of English, Routledge’s New Writing: The International Journal for the Practice and Theory of Creative Writing and other journals. Eric is a director of the Poetry Festival (Singapore).