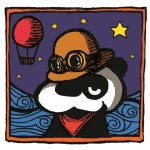 David Liew has been described as a polymath. Besides illustrating children's books, he's an active member of the Singapore Maker community. He shared the 2016 Cystal Kite Award for Asia, India and Middle East Region with writer Melanie Lee for Who is the Red Commander?, as well as a Samsung Kidstime Authors Award in the same year for Where is my Mama? from the same series. Dave is also the Regional Advisor for the Singapore chapter of the Society of Children's Book Writers and Illustrators. He has written and illustrated Nightmare on Eat Street: Tales from the Leopard Eating House, as well as illustrated Eliza Teoh's Ellie Belly series.